It’s a cringe-worthy but still common Hollywood movie formula: Girl meets boy, they clash at first sight but have to work together (arguing all the way). When they disagree they slap each other’s faces or trade smart-arse one liners before jumping into the sack for some sexy time, APPARENTLY turned on after that little spot of violence. 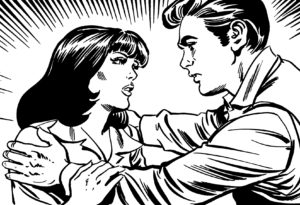 Why do we even put up with this drivel – that lashing out in anger or delivering a truckload of snappy  insults is great sexual tension? Has this insidious slap-and-kiss formula (it’s been around for decades) hypnotised us into a glazed-eyed stupor?

Seriously, would you encourage your friend or daughter to jump into bed with someone who’s given her a slap and/or called her names since they met? Probably not, but this pervasive ‘slappy-ever-after’ narrative still seems to be totally acceptable in popular culture.

We should also abandon a whole lot of other worrying relationship folktales that seem to have a bit of traction but 100% lead to unhappiness. For example, how often have you heard that a good fight is great for couples to ‘clear the air’? WTF? There is no such thing as a ‘good fight’. By its nature violence, be it physical or verbal, requires the shutdown of empathy, compassion, care and is the opposite of everything that is love. In fact, everything we know about relationships from decades of couple research comprising hundreds of studies, confirms that contempt, criticism, violence, shut-down, verbal abuse and defensiveness lead to the destruction of trust, less intimacy and consistently predict divorce.

Ever heard that old chestnut of an idea that ‘make-up’sex after a fight is extra great sex!? Well, if it is, here’s why.

It’s because of all the talking, nurturing, listening and intense emotional repairs you have to do before sex is even possible again after a fight! Imagine how much better it could have been, and how much less work, if instead of fighting you went straight to the intense connecting, talking, dealing with stresses or resentments as a team, then had sex. A long argument that gets personal takes a whole lot more time and effort to recover from and words spoken in anger are often years in the forgetting.

In short, verbal or physical violence isn’t a precursor to love and romance. Research carried out over decades by The Gottman Institute tells us that it takes an average of 5 positive comments or genuine attempts at emotional repair to recover trust after a single criticism from an intimate partner. Of course there are times when partners don’t agree – that’s normal but the single greatest predictor of whether having different perspectives is make or break is HOW partners deal with their differences. Do you attack one another when you’re pissed off, even at each other, or can you team up to battle your demons together? Need help with understanding how – read more in Staying together Means Learning to Handle Pressure.

That simple fact is – relationships take some real skills, not just love and desire, and the most essential skills are about dealing with our inevitable differences. I’ve outlined some of these most essential skills in my free eBook Hot Devotion based on my years as a couple therapist. You can grab your copy here and let’s stop accepting the lie that great relationships are anything other than loving.

Just BE the love that you ARE x